Written by Christopher Martone on November 15, 2018. Posted in Practice Areas 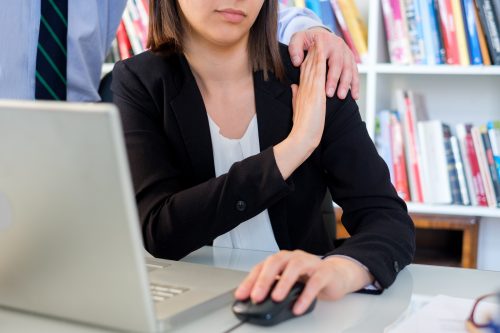 In a healthy work environment, everyone respects each other and any romantic relationships that may develop are consensual. But there are situations where some people try to take advantage of co-workers by finding emotional weaknesses and using sexual coercion to get sexual favors. In many ways, sexual coercion is very heinous kind of sexual harassment because it preys on the victim’s emotions and works to complete erode the victim’s self-respect.

In an unhealthy relationship of any kind, one person searches for ways to exert control over the other and continually push the envelope to get more and more out of the relationship. In the workplace, sexual coercion could be in the form of a manager forcing a subordinate to exchange sex for a raise, or it could be a co-worker constantly trying to test the envelope with increasingly sexual suggestions.

What is Sexual Coercion?

Sexual coercion is actually a complicated form of sexual harassment where the attacker uses various forms of emotional and psychological abuse to get a sexual reaction from the victim. This sort of harassment can range from persistent sexual innuendos all the way up to intimidating someone into sex. The complicated nature of this form of harassment is what often makes victims believe that this sort of activity is normal and is just tolerated.

Guilt as a Form of Harassment

One of the biggest tools of the person who uses sexual coercion is guilt. For example, an attacker might buy a victim a gift and then use it to try and guilt the victim into coming home with them. Another example is the attacker might say something nice to others about the victim and then expect the victim to respond with some sort of sexual favor.

Guilt is just one of the ways in which an attacker can use their words to try and intimidate a victim into sex or into a sexually charged situation. Other tools of intimidation include anger, sadness, regret, and resentment. The goal of the attacker is to convince the victim that the victim somehow owes the attacker and the repayment is often sexual favors.

Consent in the Context of Coercion

As was mentioned earlier in this discussion, the ultimate goal of an attacker in these situations is to gain consent for some sort of sexual act. But when it comes to sexual harassment such as this, consent is not legally granted when it is given under these conditions.

Consent is considered a per-occurrence type of act. Giving consent once for an act does not mean that you always give consent for it. Consent must be earned each time, and an attacker may try to convince you that because you have consented before, that consent always stands. Nothing could be further from the truth.

Manipulation and intimidation do not allow for lawful consent. If you are being coerced or intimidated in any way to give “consent”, the state laws provide that this may be actionable.

Why this is Unhealthy Anywhere

Sexual coercion is not part of a healthy personal or professional relationship under any circumstances. A healthy relationship is built on trust and respect, which are two qualities not found in coercion. It is important that victims of coercion understand that not only is this type of sexual harassment unhealthy, but it may be actionable and something that they should put a stop to immediately.

Bringing an End to Coercion

There are many cases where people who use sexual coercion do not realize they are breaking the law and they do not understand the damage they are doing to their victim. It may be possible for the victim to talk to their attacker one-on-one, explain the damage being done, and ask that the coercion stop. In some cases, a regretful attacker will often apologize and the attacks will stop.

But more intense instances of coercion need to be reported to your immediate manager immediately. If your manager is the one doing the coercion, then you need to talk to human resources about making a sexual harassment reports. The environment in corporate America is changing and these types of reports are taken more seriously than before. But to protect yourself, you should make a log of the instances of coercion and get all copies of the paperwork that is filed for your case.

If you took all of the right steps to report sexual coercion and your company has done nothing to make the situation right, then you need to step outside the corporate structure and fight back for yourself. Consider having a legal team on your side to work to get you the respect and justice you deserve.

We Can be Your Legal Team